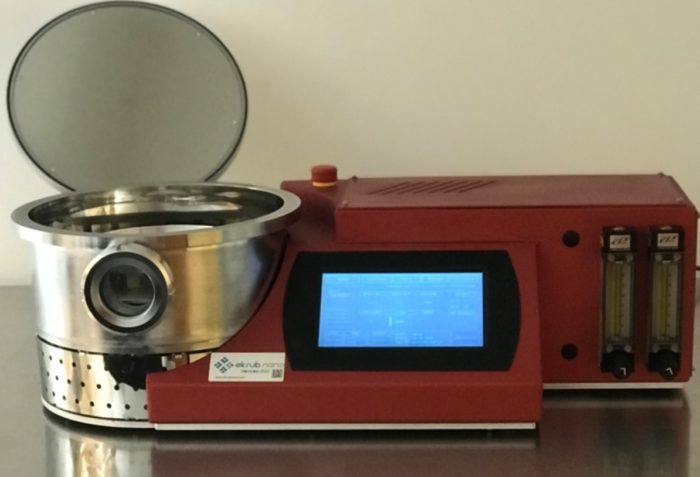 Photoresist residue sometimes remains after development, processing, and resist strip. Plasma treatment provides uniform removal of small quantities of resist over the entire surface of the wafer prior to further post processing.

Examples of other process application

Designing the visual composition and temporal behavior of a GUI is an important part of software application programming in the area of human–computer interaction. Its goal is to enhance the efficiency and ease of use for the underlying logical design of a stored program, a design discipline named usability. Methods of user-centered design are used to ensure that the visual language introduced in the design is well-tailored to the tasks.

The visible graphical interface features of an application are sometimes referred to as GUI (pronounced gooey). Typically, users interact with information by manipulating visual widgets that allow for interactions appropriate to the kind of data they hold. The widgets of a well-designed interface are selected to support the actions necessary to achieve the goals of users. A model–view–controller allows a flexible structure in which the interface is independent from and indirectly linked to application functions, so the GUI can be customized easily. This allows users to select or design a different skin at will, and eases the designer’s work to change the interface as user needs evolve. Good user interface design relates to users more, and to system architecture less.

The Micro IIon plasa RIE GUI interface was designed to be an Intuitive user interface.The graphing screen is recipe controlled function and can be enabled manually, when not in recipe control. When writing a recipe, all the system functions are available to enable for a step, or disable. All functions have the option to be enabled at the same time in the same recipe step. The same controls are available for the graphing function. the graphing function for example can be used to monitor a gas stabilizing while having the ability to monitor the RF wattage, system pressure recipe STEP time recipe STEP # and recipe STEP name. This can be incredible powerful for optimizing a recipe gas, RF power parameters in a STEP, or just optimizing recipe over time in general. 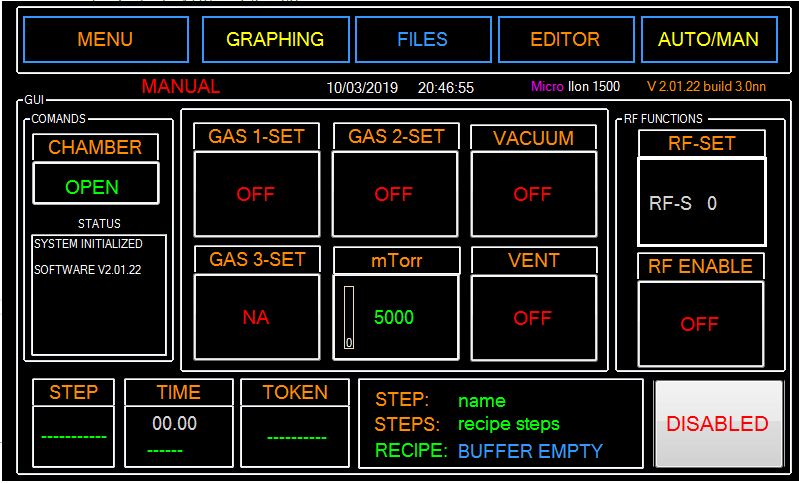 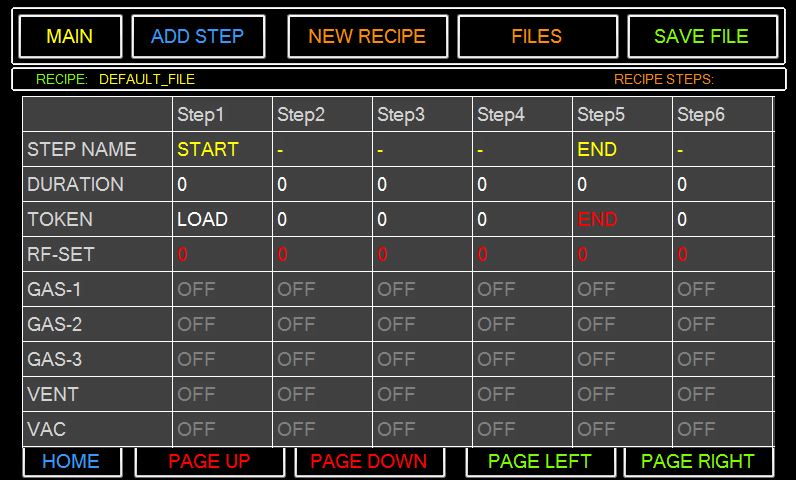 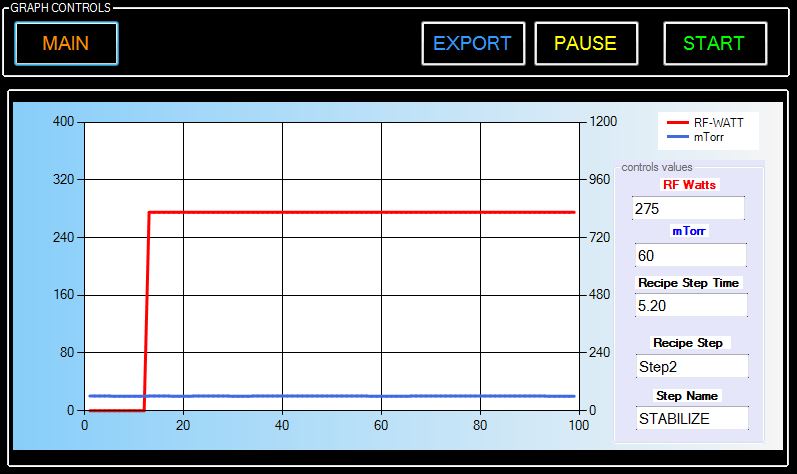 We are a U.S.-based manufacturer of plasma etch, equipment for specialty semiconductor and failure analysis, R & D and nanotechnology markets. Our team members are a collection of individuals with over 20 years in the plasma and semiconductor space and all have been innovators in plasma-processing equipment technologies.Recent our innovations include the new line of small desktop plasma RIE products to satisfy the FA and R&D markets. This market has been struggling with outdated equipment due the lack of and new logical choices. Our advanced plasma-processing in research, pilot manufacturing, and volume production. We are committed to the development of systems and services that meet the diverse requirements of our global customer base. The success of this commitment which we strives to achieve with all endeavors. Our reputation as an industry leader is supported by more than 40 years of focus on customer support, product innovation, reliability, and low cost of ownership. The success of our systems in variety of manufacturing environments and research institutions has secured the company’s status as a front runner supplier of plasma-process equipment.

Reactive-ion etching (RIE) is an etching technology used in microfabrication. RIE is a type of dry etching which has different characteristics than wet etching. RIE uses chemically reactive plasma to remove material deposited on wafers. The plasma is generated under low pressure (vacuum) by an electromagnetic field. High-energy ions from the plasma attack the wafer surface and react with it. A typical (parallel plate) RIE system consists of a cylindrical vacuum chamber, with a wafer platter situated in the bottom portion of the chamber. The wafer platter is electrically isolated from the rest of the chamber. Gas enters through small inlets in the top of the chamber, and exits to the vacuum pump system through the bottom. The types and amount of gas used vary depending upon the etch process; for instance, sulfur hexafluoride is commonly used for etching silicon. Gas pressure is typically maintained in a range between a few millitorr and a few hundred millitorr by adjusting gas flow rates and/or adjusting an exhaust orifice.Other types of RIE systems exist, including inductively coupled plasma (ICP) RIE. In this type of system, the plasma is generated with an RF powered magnetic field. Very high plasma densities can be achieved, though etch profiles tend to be more isotropic.A combination of parallel plate and inductively coupled plasma RIE is possible. In this system, the ICP is employed as a high density source of ions which increases the etch rate, whereas a separate RF bias is applied to the substrate (silicon wafer) to create directional electric fields near the substrate to achieve more anisotropic etch profiles.Plasma is initiated in the system by applying a strong RF (radio frequency) electromagnetic field to the wafer platter. The field is typically set to a frequency of 13.56 Megahertz, applied at a few hundred watts. The oscillating electric field ionizes the gas molecules by stripping them of electrons, creating a plasma.In each cycle of the field, the electrons are electrically accelerated up and down in the chamber, sometimes striking both the upper wall of the chamber and the wafer platter. At the same time, the much more massive ions move relatively little in response to the RF electric field. When electrons are absorbed into the chamber walls they are simply fed out to ground and do not alter the electronic state of the system. However, electrons deposited on the wafer platter cause the platter to build up charge due to its DC isolation. This charge build up develops a large negative voltage on the platter, typically around a few hundred volts. The plasma itself develops a slightly positive charge due to the higher concentration of positive ions compared to free electrons.Because of the large voltage difference, the positive ions tend to drift toward the wafer platter, where they collide with the samples to be etched. The ions react chemically with the materials on the surface of the samples, but can also knock off (sputter) some material by transferring some of their kinetic energy. Due to the mostly vertical delivery of reactive ions, reactive-ion etching can produce very anisotropic etch profiles, which contrast with the typically isotropic profiles of wet chemical etching.Etch conditions in an RIE system depend strongly on the many process parameters, such as pressure, gas flows, and RF power. A modified version of RIE is deep reactive-ion etching, used to excavate deep features. 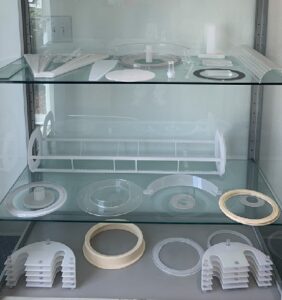